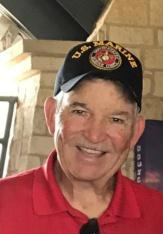 Richard W. Zipp was born in Jacksonville, FL as the latest addition to his military family. The family’s travels led them to Corpus Christi Naval Air Station and the ARADMAC facility in 1965. The family moved to Ingleside where Richard became a member of a new family, the family of Charlie and Billye Jean Harvey. Along with his “special parents,” Richard gained a new brother, C.H., and three sisters, Barbara, Judy and Molly. Richard often said his years in Ingleside were life changing and were the most memorable and enjoyable of his life. Richard’s outgoing and friendly personality made him an instant hit in the small community Ingleside was at the time. From Richards’ time living in New York, he had a gift of gab, easy going personality, and exceptional good looks. Richard was elected class favorite after only one year at Ingleside High School. After graduating in 1968, Richard joined the U.S. Marine Corps and was chosen to become a RECON Marine. This led to extensive training in the areas of scuba, parachuting, jungle and mountain terrain and sniper school. As always, Richard excelled in all these areas of training to become an elite Marine. Richard was sent to Vietnam where he served in a Special Force RECON unit. One day, Richards’ unit was sent to rescue another group of Marines who had been ambushed. In the ensuing successful operation, Richard received a close quarters wound from an AK47. He was medevac’d to the USS Guam and awarded a Purple Heart. While recovering, Richard used his musical talent to play TAPS for a burial at sea. When the Rear Admiral of the Sixth Fleet heard Richard’s trumpet, he immediately gave him a meritorious promotion to Sergeant. After leaving the hospital ship, Richard was stationed at Brooklyn Navy Yard where he completed his enlistment. Richard returned to Ingleside in 1972 and then went to Houston, where he became a member of the police department. Initially assigned to Point Control in downtown Houston, he went on to serve in the vice and north patrol divisions retiring after 21 years of service. Richard then joined the Harris County Sheriff ’s Department where he served as the bailiff for Judge Ted Poe, at the judges’ special request until 1993. After the Judge became elected Congressman Poe, Richard and his wife moved to Georgetown in 2003, where once again he became involved in law enforcement by joining the Williamson County Sheriff ’s Department where he served as Sergeant over safety and security at the Williamson County Courthouse. Wherever he was serving, Richard was always trying to make a difference in his outgoing and friendly way. He was known as “Officer Friendly.” He often said he was always trying to pay back the efforts of “Mom and Dad Harvey,” “they saved and changed my life. I’m trying to help others like they helped me.” Richard attended North Harris County College and the University of Houston where he received an Associate’s Degree in law enforcement. He attended the International Chiefs of Police Academy in Camp Lejeune, NC. Richard went on to serve in the HPD Honor Guard playing TAPS across Texas at services of fallen officers and military personnel. In 1989 he carried the Texas Flag down Pennsylvania Avenue leading a contingent of police officers for the inauguration of President George H.W. Bush. Richard’s accomplishments were many and achieved over a lifetime of giving to others. He was never too busy to help someone. Richard loved serving as he continued to serve others until his health begin to fail in 2017. He made regular visits to hospitals and nursing homes to visit those in need of his winning smile, his understanding, and his brilliant and twinkling eyes that made everyone know he cared for them. Richard loved sports. He was a devoted Green Bay Packers fan all his life and liked to poke fun at all “those Cowboy fans.” He loved golf and tried to play at least once a week. Baseball was another favorite and he attended games often and attended the 2017 Texas State High School Baseball Tour- nament at Dell Diamond when his nephew, David Harvey’s team played for the State 1A Championship. Richard’s was preceded in death by his “special parents” Charlie and Billye Jean Harvey. He is survived by his wife Nelda; brothers Mike, George, and Robert Zipp of Houston; brother C.H. Harvey and wife Chris from Fayetteville; sisters Barbara Harvey (David Mircovich), Judy Harvey (Barker), and Molly Harvey (Brad Arnold); nieces Annie Arnold (Steve Socha), Jenny Arnold (Garrett Reddehase); and nephews David Harvey, Jim Mircovich, Nat Mircovich and wife Michelle, John Bonneau and wife Danette, and Kurt Barker and wife Jessica; four nieces; and six nephews. A memorial service and celebration of the life of Richard Zipp will be held in the Fellowship Hall at the Ingleside Church of Christ, 2138 First Street, Saturday, Feb. 10, 2018 from 2 until 4 p.m. Invitation from C.H. Harvey Many of you know Richard and I were very close and closed each phone call, text, email or personal meeting with “I love you Brother”, because in every sense of the word we were Brothers. Brothers not by Blood, but by Love. Richard came to Ingleside and our family because that is where God wanted him to be. I could never count the times Richard told me the best times and memories of his life were from when he lived in Ingleside. You see, Ingleside was not a “place,” Ingleside was each and every one of you who made the formerly somewhat chaotic life he had endured, a safe and simple hometown he had never had. I can tell you he had great memories of all of you. Some story, some joke, some event, some song, something that always tied him to “Ingleside,” that safe haven that made him believe he had finally found the home he had always wanted and searched for. Thanks to each and every one of you for being a part of “Ingleside.” Hope to see you at Richards’ Memorial Service this Saturday.