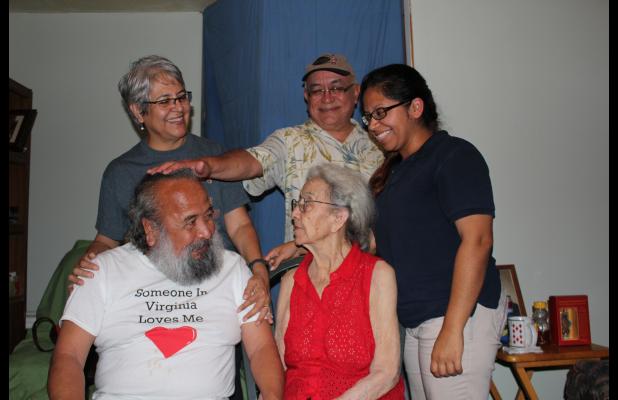 AP Man Finds Way Back to Family after 40 Years

40 years. That’s how long Isaac Avila lived without having any contact with his family members…until June 12.

“Everyday…I wondered and thought about my family everyday,” Avila said. “It just happened with my moving around to stay in printing. We didn’t have cellphones or a computer to keep up with each other.”

Avila graduated from Aransas Pass High School in 1971 and began working as a newspaper printing man. After several years working with newspapers in Texas, a friend told him about a newspaper job in Miami, Florida. “I wanted to keep printing,” Avila said. “It was in my blood, so I would go wherever the printing business took me.”

After five years in Miami, he lost his job. Avila had saved enough money to continuing living in apartments for a few months. After the money ran out, Avila became homeless. “It really happened so fast,” Avila said. “But I kept going and really being homeless helped me get back to Aransas Pass.”

In Miami, Avila became known as Chiwaawaa throughout the community. He called himself a gopher. “I would go around Miami and help people however they needed help,” Avila said. “I earned some money or food doing that.”

Avila shared the homeless community in Miami invited him into the Miami Rescue Mission shelter which led to the reconnection with his family. An organization called Miracle Messages, a part of the Miami Rescue Mission, took the lead in trying to reach out to Avila’s family. Gaby with Miracle Messages created a video message featuring Avila and posted it to Facebook. Avila explained he shared what little information about his family he knew, and she took care of the rest. “I couldn’t be here without Gaby,” Avila said. “I was shocked when she told me she found my sister because it happened so quickly.”

Within a week, Gaby and Miracle Messages had sent the video message to his sister Norma. “I couldn’t believe it,” Norma said. “In our family, we always talked about him, so I immediately sent the video to the rest of the family.”

Isaac’s sister, Lupe, made the trek from North Carolina to Miami to pick up Isaac and bring him back in his family’s arms. After a stay in North Carolina, his brother, Horace, brought Isaac to Aransas Pass from Virginia to be reunited with his mother, Cecilia.

“I always wondered and looked for him,” Cecilia said. “I’ve prayed for his return.”

Isaac shared he plans to stay in Aransas Pass to take care of his mother. “I get my sense of humor and a lot of other things from her,” Isaac said. “She is 92 and is amazing. She took care of me, and now, I finally made it back to take care of her.”

Isaac talked about how he missed Cecilia’s cooking so much over all these years.

Isaac’s niece Laura Avila talked about how she has always heard stories about Isaac. “I was just so excited to meet him for the first time,” Laura said. “And my kids get to know him now. We’re very happy.”

Isaac shared how he has seen some of his friends he grew up with and plans on reuniting with as many people as he can. “One of my friends recognized me I couldn’t really believe it,” Isaac said. “A lot has changed since I’ve been here, but some of my favorite people are still here.”

Laura and Norma talked about how his friends would always ask about Isaac when their paths crossed over the years. “We always said we’re not sure where he is or what he is doing,” Norma said. “But we’re praying he comes back to all of us.”

He came back, and Isaac and the rest of the Avila family cannot stop smiling. “It’s like Christmas everyday now,” Isaac said.

Category:
News
Subscribe and see the e-Edition of the Aransas Pass Progress for the complete story.
aransas pass weather forecast