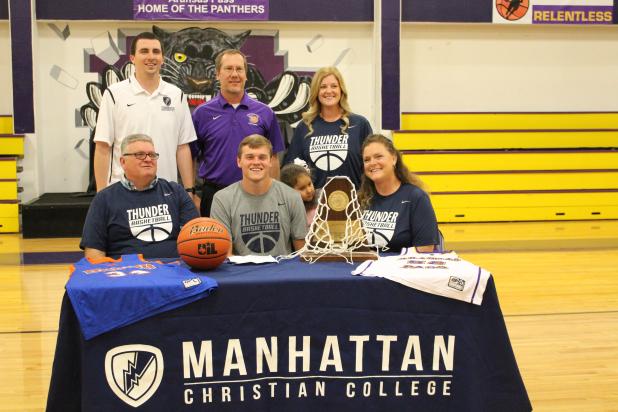 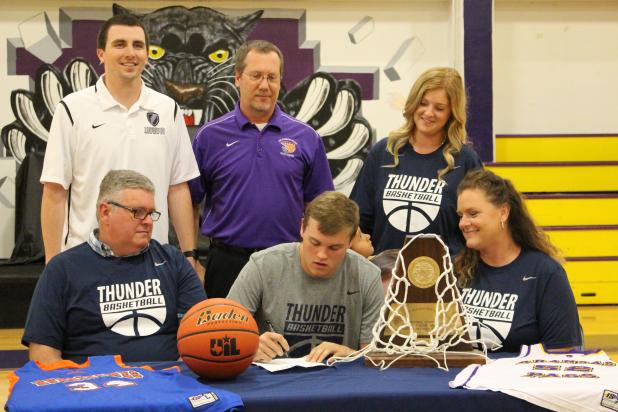 After a successful career at Aransas Pass High School, Matt McElroy’s dream to play college basketball will come true after signing to play at Manhattan Christian College in Kansas.

“A big dream of mine has always been to play college basketball,” Matt McElroy said. “I’m excited, and I’m nervous. But I already feel a part of my new family [in Kansas], and I’m ready to get going there.”

Family, friends and teammates gathered for the signing at the high school gym. Head Coach Glen Hayes started off the signing ceremony by commending McElroy’s dedication. “He’s been very committed and passionate about the sport,” Hayes said. “Those things along with his God given talent and ability is the reason for his chance to play at the next level.”

During the 2015-2016 season, McElroy proved to be the second leading contributor playing in 39 games, scoring 278 points, grabbing 323 rebounds and blocking 124 shots. Manhattan Christian College Assistant Coach Jordan Strom shared the team lost a big guy in this year’s graduating class, so McElroy was just what the team was looking for to fill that gap. “When we saw Matt’s highlights, we knew he was the guy we were looking for,” Strom said. “He’s a rim protector, and he blocks shots and gets rebounds. We’re very excited to have him a part of our program.”

Mother of McElroy, Joniann, was very emotional during and after the signing ceremony. She expressed she had so many emotions since her son was moving far away from home but excitement because of the opportunity he was getting. “I’m so proud of him,” Joniann McElroy said. “A christian college is what we wanted for him. The staff [at Manhattan Christian College] is easy to work with, and we already have such a good relationship with them.”

Matt McElroy talked about how he knows moving to Kansas will be an adjustment, but he feels comfortable with the support he will have around him. “They have already gone out of their way to make sure I’m confident about the move,” McElroy said.

The college is made up of just around 350 students total which Strom says the college uses to their advantage. “With having such a small number on campus, we really are a family,” Strom said. “We will make sure we get Matt involved with everything we have to offer not only on the court but off the court as well,” Strom said. “Our coaching staff does a really good job in making sure our players are comfortable and are a part of the family.”

McElroy will make the move and begin practicing in August.