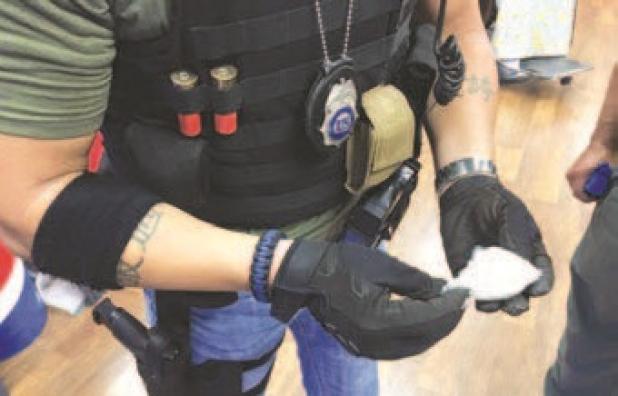 APPD Chief Eric Blanchard shared many details cannot be released since the investigation is still on going. All of the guns were collected in one location including an assault weapon, a few handguns and one illegal firearm according to Blanchard. The raid happened at five different locations, but the target and main raid happened at Diamond Cuts Barbershop in Ingleside according to Blanchard. Representatives from the barbershop and land owner of the property were both unavailable for comment at the time of publication.

The raid took place after a two-year investigation, and the investigation started in Aransas Pass according to Blanchard. After several tips and information were collected, Blanchard explained two Aransas Pass detectives assigned to the DEA along with one Ingleside DEA detective were assigned to this case. Blanchard shared the City pays over $100,000 for those detectives. “We needed the local impact this case brought,” Blanchard said. “We had a ton of information and a ton of sources about locations to turn over to the DEA.”

According to Blanchard, another positive people do not always see with drug cases is many other crimes are taken down as well. “People don’t realize these types of cases are not just about drug crimes,” Blanchard said. “The drug crimes are also about theft and violence. They cover a lot of ground.”

Blanchard talked about how this investigation was “tight lipped.” “I was even in the dark on a lot of things in this case as the detectives were working,” Blanchard said.

When enough information and evidence was collected, Blanchard explained a lot of briefing was completed, teams were created and a date was picked for the raid. “Every officer in the department here was working that day and had an active role,” Blanchard said.

Blanchard encourages the community to continue giving tips because the department and detectives try to determine if each piece of information is good to be worked. “They have to hang in there with tips because could take a while,” Blanchard said. Tips can be left at (361)758-TIPS or online at ap-police.com/crime-stoppers-tips.

“We have a lot of projects going on,” Blanchard said. “We try to stay busy to meet the needs of the community.”