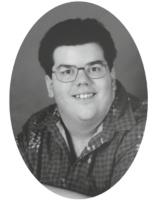 Often in the middle of our ordinary lives, sometimes undetected or unrecognized for what they really are … God sends us His extraordinary gifts. Among them is the truly remarkable life of Edward Louis Polasek, Jr. Graced with a brilliant mind and enormous heart, he arrived on loan from our Lord Dec. 12, 1985, and was reluctantly returned to his Heavenly Father on May 19, 2018. This wonderful man was known by many names including “Ed,” “Eddie,” “E.J.,” “Uncle Ed,” but most lovingly as “Tenderheart Bear.” This is because EJ was especially fond of The Care Bears. As a high-functioning autistic individual, his favorite things became a part of his interior world – as an example, he lovingly re-named each member of his family after a Care Bear. To say he was particular about how he wanted things done would have been an understatement. His daily schedule and lifestyle were planned to the minute. His photographic memory helped him recall any moment in time and he could replay it in his mind with perfect recollection. E.J. processed incredible amounts of information in mere seconds. He made friends of an entire town, having once memorized names and addresses from the telephone book as a child. While gifted beyond comprehension, he was still patient with his family (whose skill sets were inferior compared to his own and those of the angels who delivered him). E.J. preferred to keep to himself, so others lived for the moments when he entered a room and shared his thoughts or told a joke. The reality of autism is one some might perceive as an obstacle to life, but to his family it was the gift that allowed E.J. not to be limited by this world. Together they learned to communicate and love one another beyond words, sometimes in the most unconventional and beautiful ways. E.J. was preceded in death by his grandfather James Richard Polasek Sr. He is survived by his loving parents, Edward Louis Polasek Sr. (Braveheart Lion) and Mary Catherine Polasek (Cheer Bear); sister Janice Fridline (Funshine Bear) and nephew Samuel; sister Crystal Polasek Matern (Love-a-lot Bear), brother-inlaw Mason Ryan Matern (Bright Heart Raccoon), nieces Grace, Sarah Beth, Rebekah, Margaret, and Abigail, and nephew Jackson; sister Amanda Polasek (Good Luck Bear) with her fiancé Zakiah Smith (Wish Bear) and nephews David and Weston. E.J. is also survived by his grandparents Mary Margaret Polasek and Marvin and Jeanette Leister, as well as many uncles, aunts, cousins, and friends. His life was celebrated with a funeral Mass held at Our Lady of the Assumption Catholic Church in Ingleside, Wednesday, May 23, 2018, followed by a procession and burial at Prairie View Cemetery. The family is grateful for all prayers and acts of kindness, and humbly requests those who wish to offer support might consider making a donation to the Autism Spectrum Resource Center (ASRC) in Corpus Christi, Texas (www.asrc-cc.org), so local families blessed with a gift like E.J.’s might find support to provide the best possible care for their children.