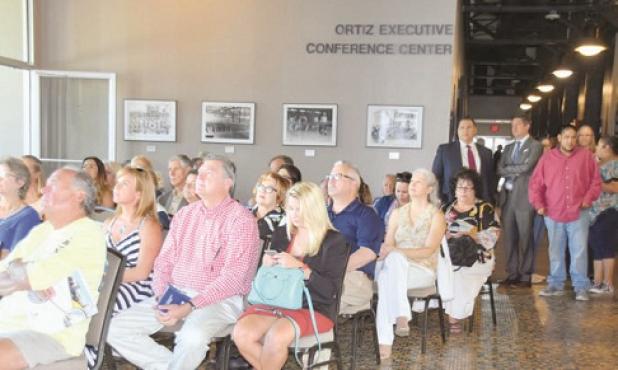 The Corpus Christi Ballroom of the Solomon P. Ortiz Center was filled to capacity. Chairs were quickly brought into the foyer and placed so a closed circuit television was visible to the overflow crowd. With all chairs taken, people stood in the hallway and in the entrance.

Twelve Texas Senators and Representatives formed the Joint Interim Committee to Study Cruise Ship Industry, and the committee was prepared to hear testimony during the hearing held Thursday, Aug. 25. Co-chaired by Representative Todd Hunter and Senator Lois Kolkhost, Kolkhost began the session by saying this committee intended to consider the economic impact for all of Texas as they look at the Texas coast between Calhoun and Cameron counties.

Panels of speakers representing different aspects of the South Texas region offered testimony regarding their impressions of the impact of the cruise industry. Groups included were mayors, county judges, Port of Corpus Christi, travel and tourism industry, chambers of commerce and economic development corporations.

From the local area, Stella Herrmann-Chandler, former Mayor of Ingleside spoke representing Mayor Luis Lamas. Burt Mills, Aransas County Judge, pointed out tourism was the only big industry in Rockport and Fulton so he supported efforts to increase tourism. San Patricio County Judge Terry Simpson said the county’s industry growth has increased residents and their disposable income which would support the cruise industry. He also stressed the cooperation of all of the region in bringing this development.

Luis Ajamil, Bermello, Ajamil & Partners, speaking with the panel from the Port of Corpus Christi, provided data about the cruise industry worldwide. Members of the committee asked many questions following his initial testimony.

Following this testimony, Senator Kolkhost said, “I lay my marker down. In five years or less, we will have a cruise ship on this part of the coastline.”

Aransas Pass Chamber of Commerce CEO Rosemary Vega said during the pre-hearing meeting she attended it was stressed this hearing would address the impact on the entire area. Discussion about where a cruise ship would be located will come later.