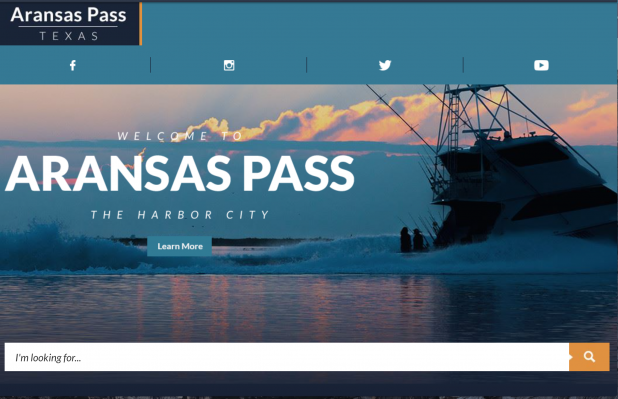 The City of Aransas Pass new website allows residents to communicate easier with the City. “Our new website has a fresh, updated appearance and includes new possibilities to open lines of communication between administration and citizens,” City Manager Sylvia Carrillo said.

According to a city press release, the website underwent a six-month re-design process by Civic Plus. Civic Plus is the leading government website provider. The press release states the website now had the ability to easily and immediately share information with citizens as well as a cleaner, easier layout to navigate.

The Notify Me sections allows residents to sign up for emails distribution of bids, jobs and news flash which gives residents a chance to be notified as soon as city business is posted on the site.

The new Civic Plus website houses two sections for community discussions including Community Voice and Join the Discussion blogs.

The Join the Discussion blogs may be initiated by any department director and Carrillo according to West. Any visitor of the site will be able to read both sections commentary. According to West, the entries will be followed closely and any entries using inappropriate language will be removed by one of the website administrators.

Based on information provided by Finance Director Donna Cox, the new Civic Plus website will have an initial investment of $40,000 for the city. The funds were provided by the 2014 bond which allocated funds to be used for technology improvements according to Cox.

The City of Aransas Pass also began a new billing system as part of the technology improvements. In May, residents received a letter from the city stating they would no longer be doing automatic payment withdrawals through credit and debit cards for utility billing. The city will still accept automatic withdrawal through direct bank drafts. To being an automatic withdrawal by bank draft, residents can bring a copy of a voided check to the utility billing window at City Hall between the 1 and 15 of the month for the following month. The withdrawal for residents account will take place on the 13 of each month. Residents can also pay their utility bills by credit and debit card through the new website. The resident will need to go online each month to pay the bill, and a pin number will be on the new bill received by post card to be entered when paying online. There is no charge for the automatic withdrawal through bank drafts. Credit card companies sometimes charge a small convenience fee when paying online which can be verified through the company.

News
Subscribe and see the e-Edition of the Aransas Pass Progress for the complete story.
aransas pass weather forecast