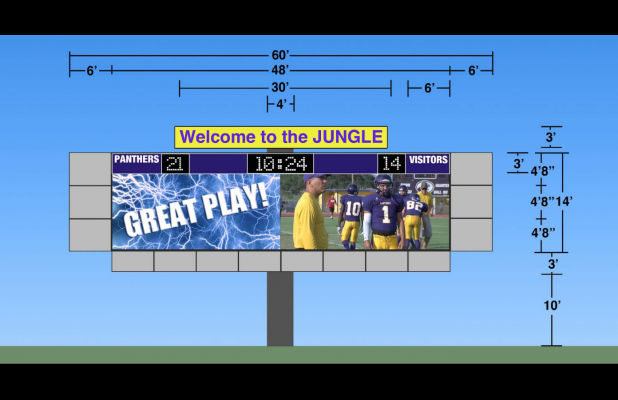 Aransas Pass athletics has teamed up with Infinity Scoreboard Group in hopes of bringing a LED jumbotron to Bo Bonorden Memorial Stadium.

APHS Head Coach Ryan Knostman and Infinity Owner Billy Robbins have been going around to the different community businesses looking for sponsors. By June 29, Robbins is hoping to receive at least $100,000 in sponsorships before moving forward with the project but will extend the deadline if necessary. He shared he has enough to be confident the project will move forward. “It’s been kind of tough honestly,” Robbins said. “But we’re getting there, and if we have to change a few things or something, we’re going to do out best to bring this jumbotron to Aransas Pass.”

The total cost of the project is around $160,000, and the LED jumbotron would feature full customization, display live game action, instant replay, graphics, sponsorships and digital scoreboard. Knostman talked about two ways the jumbotron could benefit APHS. The jumbotron would allow graphic sponsorships and other things to allow revenue for the school. “It could really be an outlet for the community to show support to the school,” Knostman said. The jumbotron also will allow students who are interested in journalism and video production to get experience. “This would be a perfect way to build our curriculum and allow those students interested in broadcasting, control booth operation or video production to get hands on experience,” Knostman said. Robbins added the project would be another way for students to feel a part of an organization and be close to the athletics side.

The sponsorship panel spots the project is seeking includes a 10-year spot with the smaller spot being $10,000 and the larger one being $25,000. “I know the price tag is kind of heavy,” Robbins said. “But it’s not that much when you look at all the benefits especially it will bring that money back through and a way to always be known as supporting the kids and school.”

Gregory-Portland is the most recent area school who has gone to LED jumbotron. Robbins explained all throughout Texas schools are making the upgrade. “These are the hot thing everyone is getting,” Robbins said. “And of course because there are so many plus sides. There is no reason Aransas Pass can’t get this addition and just put a cherry on top of the Friday night lights experience.”